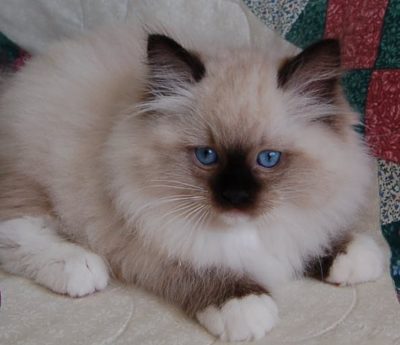 Above Kitten is a Seal Point Mitted

The Ragdoll cat breed is known for their striking blue eyes. However, not all ragdolls have them. Some Ragdolls have blue-green or gold eyes, depending on their pattern. The ragdoll breed is a large and muscular semi-longhair cat with a soft and silky coat. Like all long haired cats, Ragdolls need grooming to ensure their fur does not mat. Developed by American breeder Ann Baker in the 1960s, Ragdolls are best known for their docile and placid temperament and affectionate nature. The name “Ragdoll” is derived from the tendency of individuals from the original breeding stock to go limp and relaxed when picked up. Ragdoll cats often are known as “puppy-like cats” due to their tendency to follow people around, their love of being physically handled, and they get along well with other pets.

The Ragdoll has a docile, calm and floppy nature. The extreme docility of some individuals has led to the myth that Ragdolls are pain resistant, they are NOT.

The Ragdoll is an affectionate, intelligent, relaxed in temperament, gentle, and loves to be-handled lap cat.They have a laid back nature and affectionate behavior, with the cats often following owners from room to room as well as seeking physical affection. Ragdolls can be trained to retrieve toys and enjoy doing so.

The Ragdoll is one of the largest domesticated cat breeds, with a sturdy body, large frame, and proportionate legs. A fully-grown female weighs from 8 to 15 pounds. Males are substantially larger, ranging from 12 to 20 pounds or more. The genes for point coloration are responsible for the blue eyes of the Ragdoll. More intense shades of blue are favored in cat shows. Although the breed has a plush coat, it consists mainly of long guard hairs, while the lack of a dense undercoat results, according to the Cat Fanciers’ Association, in “reduced shedding and matting”.

Ragdolls come in different colors: red, seal, chocolate and the corresponding “dilutes”, including blue, lilac, and cream. This also includes the lynx and tortoiseshell variations in all colors and the three patterns. Ragdoll kittens are born white; they have good color at 8–10 weeks and full color and coat at 3–4 years. We also breed Minks and Solids These colors are accepted. TICA registers mink and solid color variations in the Ragdoll Breed  The three different patterns are:

Colorpoint – One color darkening at the extremities (nose, ears, tail, and paws).
Mitted – Same as pointed, but with white paws and abdomen. With or without a blaze (a white line or spot on the face), but must have a “belly stripe” (white stripe that runs from the chin to the genitals) and a white chin. Mitted Ragdolls, which weren’t allowed titling in CFA until the 2008-2009 show season, are often confused with Birmans. The easiest way to tell the difference is by size (the Ragdoll being obviously larger) and chin color (Mitted Ragdolls have white chins, while Birmans have colored chins), although breeders recognize the two by head shape and boning.
Bicolor – White legs, white inverted V on the face, white abdomen and sometimes white patches on the back. (Excessive amounts of white, or “high white”, on a bicolor is known as the Van pattern, although this doesn’t occur nearly as often as the other patterns.)

Lynx – A variant of the above type having tabby markings.
Tortoiseshell or “tortie”– A variant noted for mottled or parti-colored markings in the above patterns. 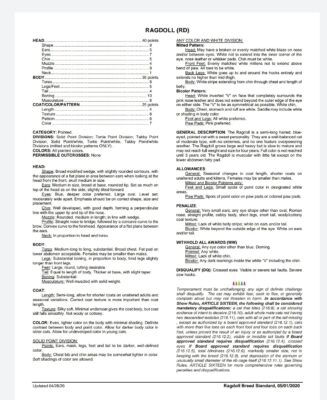